At the end of summer, shortly after I facilitated a community event on my research which unpacks anti-Blackness in the Indo-Caribbean community, I stumbled upon a crowd at Grand Army Plaza. I immediately noticed a large sign with bolded lettering, “Anti-PPP racism,”  referring to the People’s Progressive Party, a historically Indian-led political party in the small country of Guyana, where my parents are from. Hundreds of older Afro-Guyanese men and women decked out in Guyana flag and Black Lives Matter shirts were singing to the rhythmic tunes of soca, while others shouted ,“Black Lives Matter.”

When I approached someone about the event, he immediately invited me to join the march that was arriving. Aware of my positionality as an Indian-passing second-generation Guyanese, I was hesitant to enter a space that I was still learning about. I also wondered what would happen if members of the Indo-Caribbean community, with whom I conduct my research, knew I was at this rally. I have always known that my project is contentious in revealing a racial conflict rooted in the colonial and postcolonial periods in the Caribbean, but this moment was a sharp reminder that doing community work around polarizing issues goes beyond the protection of the academy, and the scope of mental preparation provided to people of color in the academy.

As someone who has engaged in various projects with community organizations, I am nourished by research centered in communities I am connected to. I feel a calling to represent the people I am most familiar with and who are severely underrepresented in the academy. However, the debates about “me-search” are never-ending, oftentimes rendering BIPOC scholars as biased or un-scholarly because of their connections to the communities they study. The real truth is that research is actually more enriching and insightful if folks do it in their own communities.

In initiating my research project, I considered how to mesh my interests with conversations happening in the Indo-Caribbean community. I began to question, how could I push the boundaries of community work, while also recognizing the nuances of how ethnic communities organize for representation based on feelings of marginality?

Though my research has always unpacked identity formation and political recognition in this community, the protests surfacing in June 2020 sparked much debate about solidarity with Black people. My project unpacks the intergenerational transmission of anti-Blackness in the Indo-Caribbean community through interviews. It emerged from my own conversations with community members about racism where they solely noted systemic racism as the reason for why anti-Blackness exists. I wanted to articulate the ways in which anti-Blackness unfolds in the everyday albeit rooted in larger structures of White supremacy and racism.

As I conducted this research I grappled with how to implement my critical lens as a scholar, while also being cautious against undermining the important work of Indo-Caribbean community organizations around combatting gender-based violence, queer rights advocacy, and overall community-building. I was asked by a community organization I have worked with for the past year, to conduct two virtual workshops on dismantling anti-Blackness in the Indo-Caribbean community. On both occasions, I was surprised by the amount of scholars and educators who attended to learn more about how anti-Blackness shows up in the community. I was also surprised by how some folks pushed back on my work, reminding me that Indo-Caribbeans are also affected by anti-Blackness in their processes of racialization. In considering these two tensions that emerged from publicizing my research to the community through community organizations, I have been wrestling with the following teachings:

1. No organization can fully represent a community

Though community organizations are leading representatives for many communities, especially in New York City, they do not represent all the opinions and values existing within a community. The organization I worked with has pushed boundaries of tradition on polemic social issues, including perspectives on race and antiblackness. However, their ultimate goals differ from my goals as a researcher and community member to challenge ways in which Indo-Caribbeans organize for representation by separating from Black people. Though it may be more accessible to work with a community organization, it is important to remember that the organization does not represent every individual in the community (and that is okay). In some instances your work may not aligned with organizations, and in that case, it is important to stay true to the core of your research and own desires in how you want to show up in the community.

2. Your scholarly work is yours

There is much debate about academics extracting knowledge from communities through partnering with organizations. In many ways, I am an outsider within the community because of my ties to the academy and my educational training. In approaching organizations, I am always honest about both my personal and scholarly interests in this community. In order to mediate the two, I offer my time and services to volunteer with the organizations I work with in order to foster trust, stimulate my own personal interests, and create a more balanced relationship.  At the same time, I am aware that whatever work I contribute to the organization, when enmeshed with my own research, is my work. Unless I am co-constructing a research project with a community organization, my research is based on work that I have done and analyzed as both a community member and scholar.

3. Collaboration does not mean holding back

If you ground your work on organizational initiatives or contribute your work to events that an organization offers, it is important to have clear understandings of the needs and values that you both hold. Be transparent about your research, your goals, and your findings. Even if your work touches on topics that the organization may not want to address, it is important to stay true to the overall findings and understandings that emerge. In my case, though community members are hesitant to confront anti-Blackness in the community and reframe it to think about their positions of marginality, my work pushes the community to challenge their way of thinking about race. I did not alter my findings because of the controversial nature of the topic. Instead, I found that by presenting something controversial, I created a space of reflection that could lead to larger projects of dismantling and solidarity with Black Caribbean organizing spaces.

If you are conducting research that may shake certain norms or standards within a community, though some leaders may be receptive to this change, not everyone will be, and that is okay. Public scholarship always runs the risk of pushing boundaries and challenging common ways of thinking, while having the potential to permit cultural shifts and changes. Be open to where community feedback takes you and your research, but also make sure that you take time to reflect, unpack, and revaluate your work.

As I work through these teachings, I will consider how to shape my dissertation to both collaborate with folks in my community, but also push the boundaries in challenging how anti-Blackness shows up in immigrant communities. At the same time, I also endeavor to engage more in these questions within scholarly environments. It is imperative that the academy provides budding scholars with more tools to engage in their communities. By being part of the academy, community research always runs the risk of engaging in paternalistic behaviors that can further marginalize communities that are underrepresented. We must protect ourselves as scholars but also recognize the ways in which we extract knowledge from people even if we are insiders on the outside. 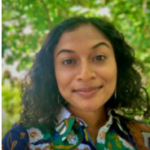 Cristine Khan (she/her) is a PhD Student in Sociology at CUNY Graduate Center. She is interested in unpacking how global antiblack ideology shapes the ways immigrant groups in the US navigate their processes of racialization. Her most recent research projects draw on her extensive work with the Indo-Caribbean community in Queens, New York. Aside from this, Cristine is interested in abolitionist pedagogy which she explores through her own teaching at CUNY and work as the Program Coordinator at the Teaching and Learning Center. The Mina Rees Library seeks a Scholarly Publishing Intern for Fall 2021 as a part of IDS 81620: Scholarly Praxis at Work in the World. The internship will provide hands-on experience with publishers’ copyright policies and various library and scholarly communication tools, and offer a front-row seat to developments and debates in scholarly publishing. Sean Gerrity, assistant professor of English at Hostos Community College, reflects on public scholarship and offers advice for how to do it well.