One of the things I love about making theatre is the process that allows artists to experiment, imagine and build worlds that do not yet exist in the rehearsal room. While creating a transformative development process is part of the goal of many practices in applied theatre, I would argue that all theatre-making processes engage in world-building to some extent. For these reasons, I have enjoyed laying the groundwork for grassroots organizations. I like to imagine that the ethical and productive spaces we build in our communities could potentially be translated to a larger world. In addition, there is great value in creating spaces for storytelling and fostering imagination.

My most recent opportunity to put ideas into action is through the creation of Docbloc. Docbloc is the public humanities component of my Ph.D. dissertation work in the Theatre and Performance program. The mission of Docbloc is to experiment with documentary form by bringing together artists working across documentary genres for conversation and collaborations in live performance. Docbloc believes in the power of documentary storytelling and believes that solidarity is created when artistic movements are connected and partnerships are fostered.

Docbloc’s vision and goals include building a community of multi-disciplinary artists working across documentary genres to explore the intersections between theatre, lived experiences, and journalism; creating documentary work across platforms, in-person and online; using multiple techniques to capture and tell stories to portray the complexities of lived experiences; and working in partnership with local communities in bringing live performance to spaces where it is not often used as a tool for activism.

Through the 2021 Summer Publics Lab grant, we were able to lay a strong foundation for our work, including building a website and social media presence, obtaining fiscal sponsorship, and finding support for our first project, “20 Years Later,” a devised documentary theatre piece investigating what it means to grow up in the wake of 9/11. “20 Years Later” is composed of interviews and personal narratives from people under the age of 21 who learned about the events of September 11th, 2001, through school and the media.

Building the foundation and structure of Docbloc is forcing me to grapple with questions about organizational structure, ethics, and labor in the “post”-coronavirus world. Having Docbloc be a product of my work at the CUNY Graduate Center has challenged me to think about organization building as intellectual labor. After all, the organizations we build and the structures we collectively create and uphold have everything to do with what we value.

Before undertaking Ph.D. work, I was at the helm of building several successful arts organizations, nonprofits, and NGOs. My art and documentary work has historically existed on the margins – in the grey areas of theatre, social justice, research, and practice. And while this is often provocative and unpredictable, and has allowed me to travel the world and have some inspiring experiences, it usually comes with the task of having to tirelessly explain what I do, why it’s valid, and why it’s either “real” art or “real” scholarship, depending on the audience. Organization building is not assumed to be either art or scholarship –– and yet, my experience is that it combines intellectual, artistic, emotional, and physical forms of labor.

One of the biggest traps I’ve been trying to avoid in developing Docbloc is building from the scarcity mindset that permeates the culture of many arts and nonprofit organizations. Defined by nonprofit attorney Neil Edgington, scarcity thinking is “the starvation cycle in which nonprofit leaders often exist – we can’t attract enough money, so we skimp on staff and systems, becoming less effective, forcing us to serve fewer clients, resulting in less social change” (Edgington, 2018). Organizations (and many individuals) adapt to scarcity mindsets when they become obsessed with the lack of money and resources. Scarcity thinking inevitably leads to a toxic culture and burnout. Not only is scarcity thinking prevalent in non-profit culture, but I have experienced it in all aspects of artmaking and throughout my time as a graduate student in academia. There are obvious reasons for this and parallels that can be drawn between the current capitalist systems and scarcity mentality that are far beyond the scope of this blog post.

To limit my own scarcity mindset, I am constantly thinking about how I define and renegotiate the terms of “success” and what is motivating that definition. I am focusing on what I have in the present moment (including the resources and access available to me through the CUNY Graduate Center) and building an advisory team of people who are committed to the mission and work. I am continuously looking for possibilities and places for collaboration and having realistic expectations and goals. I continuously ask myself questions about power. For example, when Docbloc can pay staff, what would co-leadership look like?

Like the leadership of many other theatre companies, I want Docbloc to be artist-centered, meaning that I want the needs of the artists and communities we work with to be at the forefront of our practice. I want the artists in Docbloc’s community to help determine the direction and projects the organization will take on. In normalizing this early on as part of our culture, I took the cast of “20 Years Later” out for pizza to hear their ideas on what Docbloc could potentially do to raise the voice of young artists. All of the performers echoed similar ideas: “We want internships that provide real mentorship – and to be seen as mentees as opposed to ‘interns’…” The term “intern” carries a pejorative context within the arts. These positions are often unpaid and exploitative, offering “exposure” as the main benefit of the position. The cast continued, “We want to be seen as future collaborators and be brought into a community that we can be part of long after a show has ended.”

I am often asked to speak about how I balance my art and scholarship. Despite my best attempts, I have never separated my identity as an artist from that of a scholar. It seems counterproductive, especially given the work I do. Instead, I engage with ideas and put them into practice. It’s what I’ve done, and it’s what I will continue to do. I look forward to seeing how ideas are placed into practice and evolve through Docbloc. 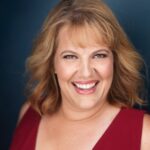 Ash Marinaccio is currently a Ph.D. Candidate in Theatre and Performance at the CUNY Graduate Center writing a dissertation on nonfiction/documentary theatre-making in war zones. She is a multidisciplinary documentarian working in theatre, photography, and film. For her public scholarship, she’s received a NY Public Humanities Fellowship, Mellon Foundation Senior Public Humanities Fellowship, and several Provost grants from CUNY. She’s the creator of Docbloc (docbloc.org), which brings together documentary artists working across genres. Learn more: ashmarinaccio.com / instagram: @introublewiththeking How do we––as researchers, as participants, as members of a community––balance the importance of speaking up against the potential consequences of doing so? Furthermore, how do we increase the agency and empowerment that participants have over their own stories?