The PublicsLab and the American Social History Project recently co-sponsored a dynamic event featuring Ghost River: The Fall and Rise of the Conestoga (Red Planet Books and Comics, 2019), a graphic novel about the Paxton massacres of 1763. In a roundtable conversation, Ghost River editor Dr. Will Fenton, illustrator Weshoyot Alvitre (Tongva), and author Dr. Lee Francis IV (Pueblo of Laguna) discussed the scholarly and creative collaboration that went into this public-facing humanities project. Will led a discussion about how artistic reinterpretation of existing colonial records allowed them to work as a team to construct a narrative that re-centers the Indigenous past and present in studies of colonial America.

Ghost River documents a massacre in Lancaster, Pennsylvania, in which a group of former militiamen murdered the Conestoga People in cold blood. The panelists advised audience members who are interested in collaboration to carefully research potential collaborators, to embrace creative tension as a necessary part of collaboration, and to figure out what is non-negotiable for members of the team. Collaboration is based on relationships, trust, and conversation, and it helps when everyone is passionate about the project. Will, Lee, and Weshoyot reflected on the sense of shared responsibility that motivated them to participate in Ghost River, and their collaboration can serve as a model for scholars and researchers of how to work in and with the communities we research.

Instead of focusing on the murderous Paxton Boys, the team used artistic representation to foreground the Indigenous peoples at the center of the story, an act of defiance and decolonization. The graphic novel format allowed them to particularize and humanize the narrative while they forged new connections across time and space. Together, they redrew history from an Indigeneous perspective, making sure that the story was not about victimization. They didn’t want to perpetuate the idea of a tragic Native existence. “The fetishization of tragedy that so often happens in Western literature is dangerous because it doesn’t allow any reconciliation for Native peoples who still exist,” Lee said, noting that the use of visuals made their retelling even more powerful. Although the project came out of Will’s dissertation work on the Paxton pamphlets, Will wanted to center the work of Indigenous artists in the graphic novel. He researched creatives who reconceive historical materials with the urgency of today, and reached out to Lee and Weshoyot over email to introduce himself and describe the project.

To demonstrate that he was serious about working together, Will flew to Albuquerque, New Mexico to attend Indigenous Comic Con, which Lee organizes through his publishing company Native Realities. This gesture allowed him to talk with his potential collaborators in person. Lee said, “Anybody who’s willing to take a flight out to Albuquerque garners something solid. It means they’re genuine.” Lee was interested in the project because of its focus  on including Native creatives, Native communities, and Native history. The Natives who were killed are lost in most tellings of the Paxton massacres, which are based solely on colonial accounts, and that’s what drew him in. Weshoyot felt a sense of personal responsibility when she recognized a story that she couldn’t remember being taught in school, a story in Indigenous history that lacked a Native voice. She researched Will and visited his website, Digital Paxton, and after talking with him in person and investigating his social media presence, she decided to join the team. She noted that it’s important to check out a potential collaborator’s social media accounts, especially when the project is political.

Every team member was passionate about the project. Will had been researching this historical moment’s paper trail—the broadsides, pamphlets, and political cartoons that document these murders focus on the grievances of the Paxton Boys—for years for Digital Paxton and his dissertation. Now, he sought to decenter the colonial print sphere and highlight Native voices instead. “We [Native Americans] couldn’t put out our own broadsides or pamphlets,” Lee said, noting that he was passionate about helping to surface the perspectives of Native peoples effaced in colonial print. Similarly, Weshoyot was motivated to use her artistic talents to reinterpret this history. She chose to use the traditional art medium of antique dip pen and ink, focusing on earth-based pigment watercolors handmade by the PIGMENT HUNTER. She tied her artwork to the land by use of minerals in the same way Native peoples actively cultivate their relationship to the world they live in and care for. Her artistic choices were incredibly important to the success of this project, and she chose her materials with care and a sense of responsibility.

Over time, the team began to trust one another. It helped that Lee and Weshoyot already had experience working together—Weshoyot purposely recommended collaborating with Lee so she could work with someone she already felt comfortable with. They had their own rhythm and communication style, which reduced potential anxiety and stress. One scene in particular was difficult to recreate: the moment when the remaining Conestoga people were massacred at a jailhouse. This required them to communicate openly, a key aspect of successful collaboration. Lee didn’t want to portray this scene in a way that was gruesome or proliferated violence in a way that could be harmful—he wanted to change the dynamic to show that the Conestoga people knew what was coming and accepted it. Weshoyot had to emotionally prepare for drawing this 5-6 page scene, and she problem-solved under a tight deadline. “The original script was dramatic, like a film noir. There was a beautiful play between dark and light leading up to the point of the actual massacre,” she said. But they had to change their approach when they learned that the massacre didn’t happen in the dark—the Conestoga people were killed in broad daylight in the jailhouse courtyard.

With the team’s input, Weshoyot decided that instead of focusing on the sheer violence of this moment, she would incorporate visual metaphors that tie back to the tribe’s material culture. She rewrote part of the script to reimagine the scene in the actual setting while maintaining the integrity of what Lee had already written. She wanted to show the violence being applied to a wampum belt, an object of cultural significance. She thought of the beads breaking and how each individual bead is similar to a person. Lee thought her rewrite was fantastic and sent it to Will, and they wound up rolling with it. This communicative flexibility and creativity allowed them to tell the story in a way they felt was appropriate and fulfilled their responsibility.

Trust, communication, and personal investment in the project developed as the team visited archives and historical sites together. In Lancaster, Pennsylvania, their conversations with the local Indigenous community helped them recognize their obligation to living Indigenous peoples. Seeing the original site of the massacre and engaging with community members was profound for Lee; it made the project feel even more real and relevant.  Weshoyot appreciated Will’s invitation to meet at The Library Company. By setting up a meeting in a space that Indigenous people were historically excluded from, Will made an inclusive gesture that helped cultivate trust. “Indigenous peoples are often kept out of spaces like these. Taking up space in that way hit me on the first day,” Weshoyot said. They were all honored to meet Curtis, a living descendent of the people they’d be writing about. He laid out his concerns and hopes directly, conveying the weight of the project. Driving past the jailhouse, visiting the replica of the village site, and going to one of the archeological sites added to their sense of the project’s importance. Will made sure to bring in numerous experts from the field to assist them as they worked.

This panel was an energizing reminder of the power of collaboration and the importance of prioritizing the voices and concerns of communities we research. Visual art can ground history in our present reality, helping others connect with material culture and adding new dimensions to text. Will’s decision to work with Indigenous creators ensured that Ghost River was focused on Indigenous voices past and present. Through this collaborative  lens, the team envisioned new futures. Their collaboration resulted in a deeply thoughtful, bracing, emotional, and humanizing testament to lost voices. Their reflections on collaboration can be of great use to scholars who want their work to reach beyond the confines of academia and do justice to the voices that are lost in historical records and ephemera. Will, Lee, and Weshoyot succeeded in shedding light on Native voices that are missing from colonial print and portraying Native peoples as more than victims of violence. This exciting conversation was a realistic portrayal of successful collaboration, and a testament to the power of the graphic novel to decolonize through artistic representation. 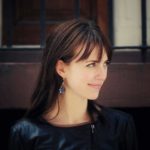 Madeleine Barnes is a poet, visual artist, and English PhD student. Her research focuses on women’s domestic embroidery and poetry as forms of public and private resistance in Early Modern England. A co-curator of the Lunar Walk Poetry Series, Poetry Editor at Cordella Magazine, and Publicity Assistant at Press Shop PR, Madeleine is dedicated to showcasing the work of underrepresented groups within and outside of academia, dissolving boundaries between art and scholarship. Her debut poetry collection was published by Trio House Press in July 2020, and she has taught creative writing and humanities research at Brooklyn College and NYU, where she earned an MFA in Creative Writing. Mellon Humanities Public Fellow Daniel Valtueña offers tips on how to foster curriculum change in your program based on his experience with the PublicsLab’s Doctoral Curriculum Enhancement Grant (DCEG). PublicsLab director Stacy Hartman discusses why graduate students are so often told to “turtle” and why we should stop giving that advice. In summer 2019, I made my fourth dissertation research trip to Mexico. Between the first trip in the summer of 2017 and […]