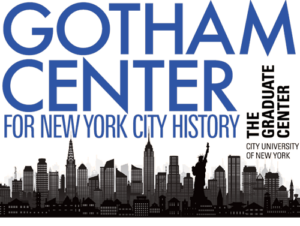 ABOUT THE GOTHAM CENTER FOR NEW YORK CITY HISTORY

The Gotham Center is a research and public education institution, sponsored by The Graduate Center, CUNY, dedicated to advancing scholarly and public understanding of New York City’s rich and living past. The organization was founded in 2000 by Mike Wallace, after his landmark work Gotham: A History of New York City to 1898, co-authored with Edwin Burrows, won the Pulitzer. For more than twenty years, it has been the one academic institution devoted exclusively to promoting this critical field of study.

Our goal is to support independent and professional historical work examining the various forces and figures that have shaped life in the city, as well as New York’s enormous contributions to the development of the nation and the world. Through a variety of research programs — grants, fellowships, seminars, conferences, and other projects — we hope to underwrite the production of this knowledge and shape the next generation of scholarship. Through a variety of public-facing initiatives — such as our free event series, blog, podcasts, online education and K-12 programs — we also strive to make that knowledge available to the widest possible audience, sharing the best and most interesting new work far beyond the academic community and immediate metropolitan area. Finally, we endeavor to make this information useful to actors influencing culture and policy today, fostering greater awareness of historical knowledge and exchange between scholars and leaders in civil society and government. In all things, we ask New Yorkers to consider how the past has created the present, and what lessons it might offer for the challenges we face in our city, now and in the future.

The Gotham Center is seeking a Research Intern for Fall 2021. The intern will assist in the development of a digital exhibit on New York City’s experience in the American Revolution. This work serves as the foundation of a much larger project, that will continue until 2026 (the 250th anniversary of 1776), seeking to create a scalable, multimedia app for tourists, educators, and the general public. A funding campaign is underway to build the infrastructure and high-end digital technology (CGI, AR/VR) that will recreate the landscape of the period, as well as some of its more dramatic events, linking this content to existing physical sites, and networking multimedia at partnering institutions. The result will be NYC’s first organized ‘freedom trail,’ offering self-guided walking tours, educational curricula for K-14, material on a wide range of subjects for higher learning, and other complementary programming.

The project seeks to re-center NYC in the armed struggle, highlighting some of the war’s most pivotal events and notable figures on both sides of the conflict, but also to present a more inclusive and complicated story of the nation’s founding. Moving the geographic vantage from Boston or Philadelphia means diversifying the cast and complicating the plot, revealing the war’s ‘civil’ nature and its extraordinary violence, as well as pointing up both its liberating and devastating effects. The exhibit/app will foreground both Patriot spies and familiar elites as well as Loyalists, British leaders, and P.O.W.’s, slaves emancipated by the crown, indigenous tribes caught between foreign imperial powers, New York City’s dramatic environmental ruin, and more.

The research intern will be responsible for annotating bibliographies and drafting summary texts, as well as collecting maps, important or representative documents, and visual imagery that may be housed in ‘break-out sections’ at each site, providing greater learning or K-12 educational material to subjects introduced briefly in the overall ‘walking tour.’ A large number of Graduate Center History PhD students/candidates and CUNY faculty serve as peer review / content advisers. The intern will report to the project coordinator and the Gotham Center’s Director, and may join a team of researchers financed by pending grants. It is our expectation that there will be future paid opportunities as well. The intern, like the rest of the staff, will work remotely.

This internship will consist of approximately 150 hours of work over the course of the Fall 2021 semester. It will be compensated with 3 units of academic credit through IDS 81620: Scholarly Praxis at Work in the World.

Applications will be accepted until May 10. The application can be found by logging into GC Connect and search for job #16580 or the tag “scholarly praxis.”

The Gotham Center is an equal opportunity employer.

3 units of academic credit through IDS 86120 Queens Council on the Arts seeks a Fall 2021 High School to Art School (HS2AS) Student and Alumni Engagement Intern, to assist with the engagement of art-school bound students and program alumni.