In the last fifteen years, podcasting has emerged as an important mode of telling stories, disseminating knowledge and advancing discourse. As podcasting has become more popular, scholars have taken up the form to both advance their research and use their skills and training in creative ways. This panel, comprised of podcasters both inside and outside the academy, will consider podcasting’s potential for scholarly communication, public scholarship, and alternative careers.

This panel will address such questions as: What aspects of academic training are useful in podcasting? What kinds of stories and conversations are best suited for podcasting? What is the relationship between podcasting and other modes of knowledge production inside and outside the academy?

RSVP for the panel by registering via Zoom! If you have any accessibility needs for this event, please email us at publicslab@gc.cuny.edu.

The PublicsLab thanks Andrew Viñales for his work in organizing this event. 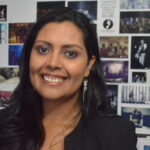 Sandra Lopez-Monsalve is a multimedia producer and audio engineer. She fell in love with radio while cutting actual tape for a local station in her native Bogota (Colombia) in the late 90s. Since then, Sandra has produced and engineered stories for news programs, magazine shows, and podcasts for a variety of media outlets including WNYC, KCRW, SLATE, PBS, NOVA, TED, The Atlantic, and CUNY TV among others. She was the technical director for the Peabody Award-winning show “Studio 360 with Kurt Andersen,” and the sound designer for KCRW’s Sarah Award-winning, bilingual, fiction podcast, “Celestial Blood/Sangre Celestial”. Sandra loves history, radio dramas, movies, and black cats. Currently, Sandra works creating amazing audio artifacts at the PRX Production Unit. 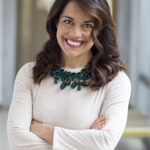 Natalia Mehlman Petrzela is a historian of contemporary American politics and culture. She is the author of Classroom Wars: Language, Sex, and the Making of Modern Political Culture (Oxford University Press, 2015), and the forthcoming FIT NATION: How America Embraced Exercise As The Government Abandoned It (University of Chicago Press). She is co-producer and host of the hit podcast WELCOME TO YOUR FANTASY, from Pineapple Street Studios and Gimlet, and the co-host of Past Present Podcast. Natalia is a frequent media guest expert, public speaker, and contributor to international and domestic news outlets, from the New York Times to the Washington Post to the Atlantic. She is Associate Professor of History at The New School, co-founded and directed the wellness education program Healthclass 2.0, and a Premiere Leader of the mind-body practice intenSati. She holds a B.A. from Columbia and a master’s and Ph.D. from Stanford and lives with her husband and two children in New York City.

Latif Nasser is co-host of the award-winning New York Public Radio show Radiolab, where he has done stories on everything from snowflake photography to space junk to a polar bear who liked to have sex with grizzly bears. In addition to his work in audio, Latif is the host and executive producer for the Netflix science documentary series Connected.  He has also given two TED talks and written for the Boston Globe Ideas section. He got his PhD from Harvard’s History of Science department in 2014. 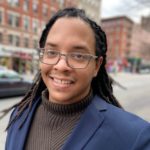 Andrew Viñales was born and raised in the Bronx, New York by proud Puerto Rican and Dominican families. He is a twin and practitioner in the Lukumí Afro-Cuban Orisha tradition, as well as an oral historian and cultural worker passionate about highlighting the experiences of queer Afro-Latinx politics, culture, and spirituality. Currently, he is a PhD student in cultural anthropology. He hopes to develop his skills in digital storytelling and facilitation as tools to take his work outside of traditional academic settings and put it in service to Afro-Latinxs in the US and in Latin America. 11/04/2019 @ 4:00 pm – 6:00 pm – Room 3317. We’ve all had the nightmare that exposes our fears of public speaking, the one where you’re alone on stage in front of an audience. This workshop will help you improve your oral presentation skills and conquer your fear of being alone on stage. We’ll review your approach towards oral communications, focusing on a […] 05/01/2020 @ 3:00 pm – 4:00 pm – In place of the postponed Graduate Education at Work in the World conference, we are excited to announce “Graduate Education for the Public Good” on May 1st, 2020 from 3:00-4:00pm (ET), co-sponsored by the PublicsLab and the Futures Initiative. The conference organizers will be hosting a special edition of HASTAC’s Digital Fridays online workshop series to […] 10/23/2019 @ 3:30 pm – 4:45 pm – Room 5318. Space is limited, so please register below. In this presentation, Glory Edim talks participants through her journey from creative strategist at Kickstarter to author and community builder as Founder of Well-Read Black Girl. Participants interested in learning about marketing and creating community on and off-line will be especially interested in this workshop. Glory […] 03/27/2020 @ 10:00 am – 4:00 pm – Due to The Graduate Center’s coronavirus update, this workshop has been canceled. We will look to hold this event at some point in the future. Room 3317. What makes an oral history interview different from other kinds of interviews, and what does oral history have to offer graduate students and other researchers? Miriam Laytner, an […]